MY HAPPILY EVER AFTER GIRLS CAMP

***For handouts scroll to the bottom, if you would like a schedule of time please email me and I will be happy to send you one! dani AT lovemedanimarie DOT com***
First, don’t forget to enter the R&E Avenue giveaway for 2 personalized leather wrap bracelets, or the Our World Boutique giveaway for 2 statement necklaces!
So I was girls camp director for my ward this year and struggled to find handouts and things for the theme “Your Happily Ever After” by President Uchtdorf. So I thought I would share the handouts I made with all of you so maybe you won’t have to go to as much work as I did making all of them.  I changed the theme to “My Happily Ever After” because I wanted each of the girls to personalize it. Our camp was kinda short, we arrived on Wednesday at 2:30 and had to check out Friday at 11:30. I thought it ended up perfect because everyone left having fun and still getting along.
Here is the table I set up that stayed up the entire camp. I wanted a picture of Christ and the Temple up the entire time so the girls remembered that was the reason we were there. All of the little glass containers I used for handouts so the girls could pass them around. 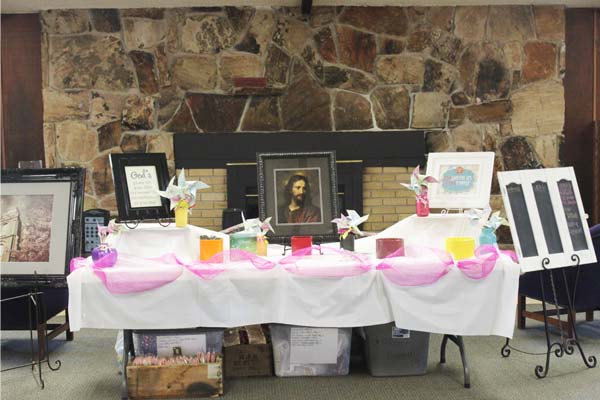 I broke the girls up into cabins by Disney Princess’. There was a Brave Cabin, Cinderella, Snow White, Sleeping Beauty, and Rapunzel. They each got a rosette to wear during all of camp so we knew who was in what cabin. I hand made each of their rosettes. 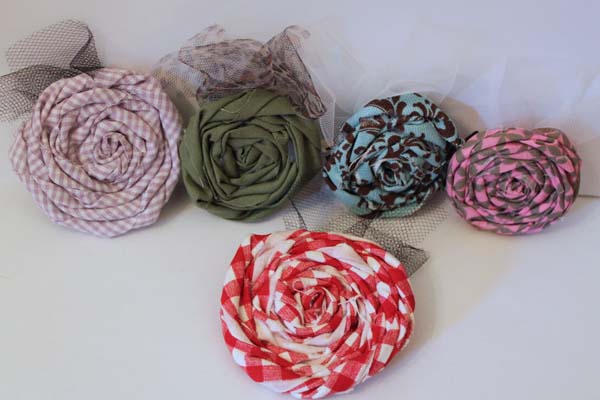 I had this chalk board up the whole time so each cabin would know who was in charge of prep and clean up for each meal. 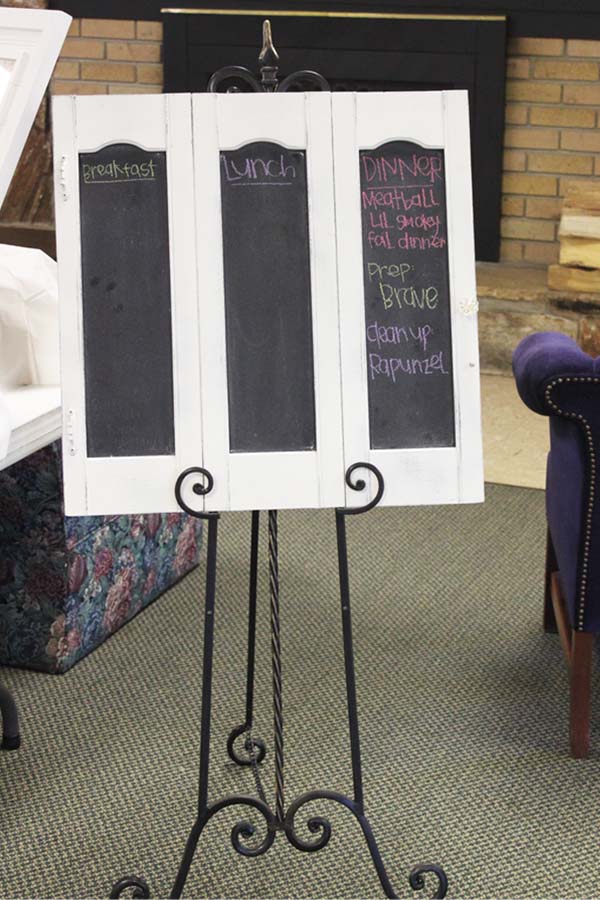 When we first got there, I introduced the theme of camp and explained to them each part of the day would be about a Disney Princess. We started with Cinderella. Cinderella had to work with her mean stepsisters and had to go through some terrible things to finally meet her prince. I explained to them that throughout camp I would be watching for girls that were helping or being really kind to each other and they would get a plastic glass slipper filled with treats.I let them unpack and play Volleyball, Basketball, Tetherball, etc. as cabins to get to know each other a little better due to the recent ward switches. After that we had dinner. We then did Princess Finishing School.  I asked a few leaders to teach the lessons and bring a handout and treat. We did 15-20 minute rotations for each class. The topics were the following:
What a princess wears (modesty), A letter from your king (patriarchal blessings), Modern Day Royalty (how to act as a princess now), Temple Marriage, Writing your princess story (journaling).
Later that night our amazing bishop’s wife dressed up as the fairy godmother and came and talked to the girls about how the 2nd coming is just like Cinderella’s midnight. We have to be prepared for what’s to come even though we may not realize its coming. 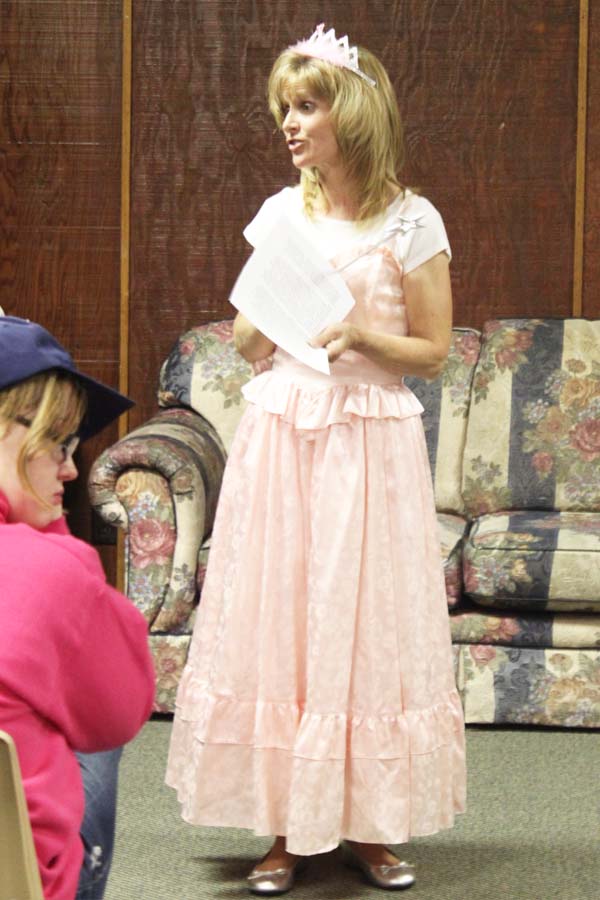 The next day we had the morning be Beauty and the Beast. We talked about how Beast was Belle’s weakness. He scared her, intimidated her, and discouraged her, but she eventually turned him into her prince. I had each girl get out the journal I gave to them and write down a few weakness’ they had in their lives and how to change them into their prince’s just like Belle did.
We did a craft next. We did temple blocks. My cute husband cut all the wood for us!
Supplies:
Wood cut a few inches wider than the size of picture you decide to use
Paint
Brushes
Sandpaper
Stain
Ribbon
Tulle
Picture – We used these ones from cute Lil Luna’s blog!
Glue dots 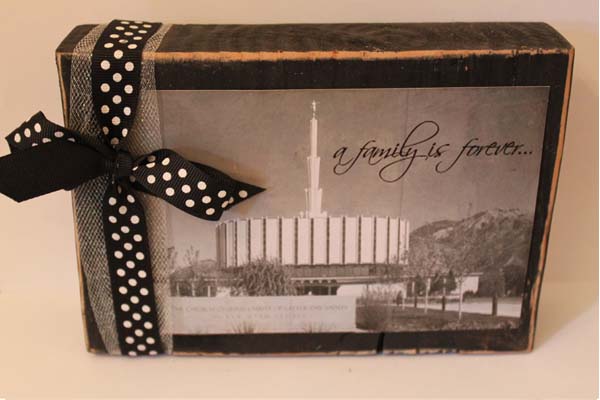 While their wood was drying, I had 20 gauge wire for them to make rings. The girls made some very creative ones!
Supplies:
20 gauge wire
Pliers to move the wire around
Beads (opt.) 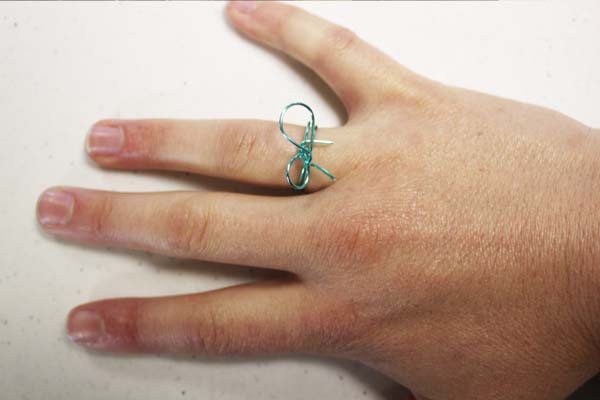 Before lunch we had tiles and one of our YW leaders cut out this cute vinyl to go on them. 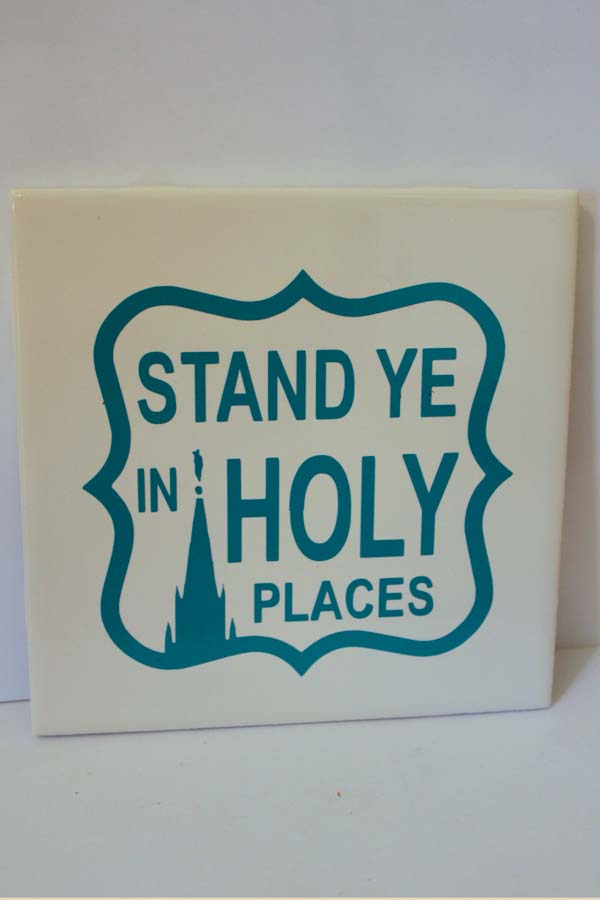 We also made picture blocks for them to place their handouts on. They are 4×4 pieces of wood with a hole drilled in the top then wire twisted to hold a handout.
Supplies:
4×4 wood with a small hole in the top
Wire
Paper
Embellishments
Handout for the top

I think their favorite part of the time was skits! I split them up by cabins and gave them a stack of newspaper to dress one girl up from their cabin up in. They were SO creative. They had to relate their princess to the gospel and they were so creative! One group even dressed up bishop! 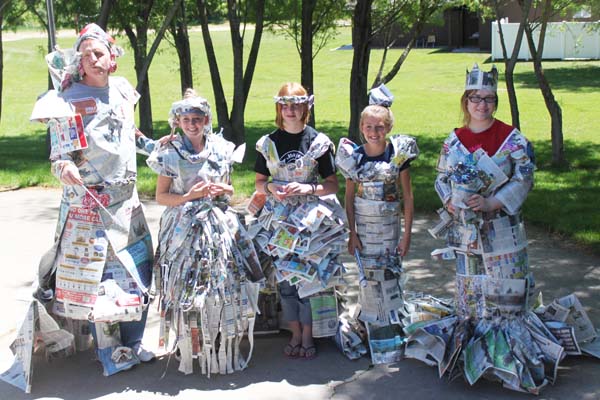 The afternoon’s theme was Tangled. We talked about how Rapunzel was locked up in a tower, she had to learn who she was and where she came from before she could find her palace. In the movie she follows the paper lanterns back to her kingdom. I set up a trail of paper bag lanterns that lead them from their cabins into the lodge. When they arrived they all sat down quietly and we had testimony meeting. So sorry I didn’t get pictures of the lanterns. I also made these princess pillar balloon towers for the entrance to the lodge and had a big picture of the temple hanging so they knew they had arrived at their kingdom.
Supplies for Lantern trail:
Brown Paper Bags
Tea Lights

Supplies for Balloon Pillars:
PVC pipe stands
Balloons
(You blow up balloons and tie 2 ends together, then twist one pair of 2 to another pair. Then wiggle them onto the PVC pipe. I googled balloon pillars and found a YouTube Video on it. It was so so easy and quick to put together) 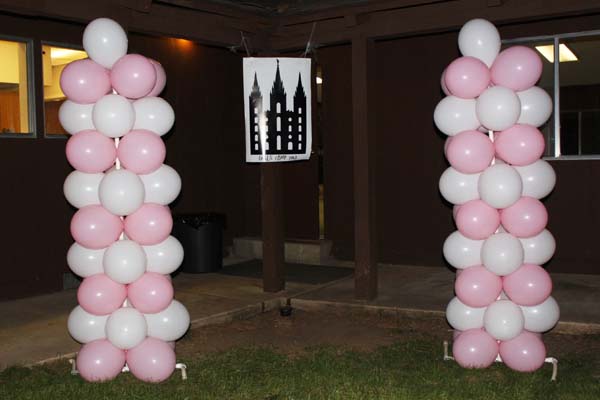 The next morning we ate breakfast packed up and headed out!
These are the journals each girl received. 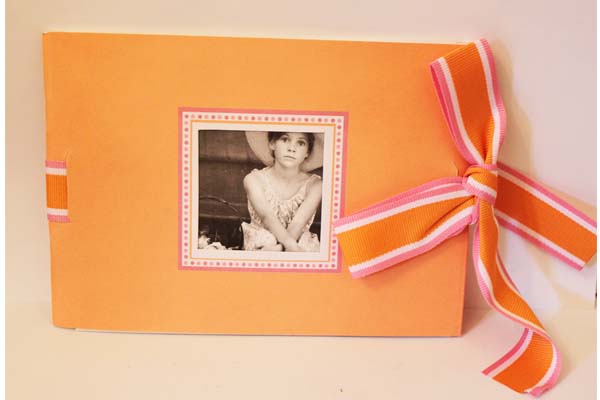 Here are the many handouts they each received. They got a handout at every meal, activity, and one every night for pillow treats! I would be thrilled to send you the JPG files if you would like them! Please just JOIN my site and send me an email to dani AT lovemedanimarie DOT com and I will send them over to you! 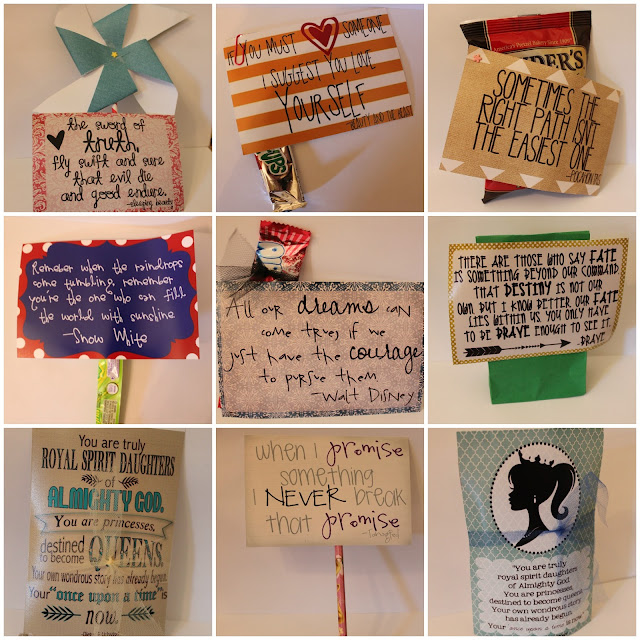 The bottom right picture is from The Creative Itch Boutique. You can head over and email her for that handout! 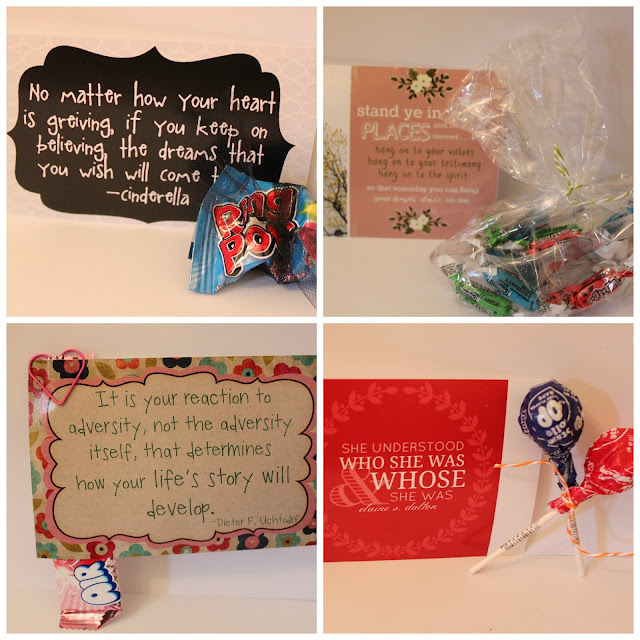